All testimonials below were solicited from the parents/guardians of former ABA clients after discontinuation of services.

Meet Christopher, a very intelligent and vibrant little boy. He has a smile that can melt anyones heart. He's determined and very energetic. He was diagnosed with autism at the age of two. It was a devastating blow to our family just to hear the words that our son had this terrible disease that we knew little about. We did a lot of research and read the pamphlets that were given to us, but no article or excerpt could prepare us for what was about to come. Shortly after that, Chris' behavior began to spiral out of control. He experienced severe mood swings, and his behavior was unbearable.
Christopher began attendance at Chrysalis Autism Center at the age of four. Before going to CAC, Chris had a very small vocabulary of words, used no sign language, and he was still having major behavior problems. With the intense therapy, hard work, and dedication from the staff at CAC, and from us at home, Chris has made monumental improvements in many areas. His speech and communication skills are getting better. He has some verbal usage and sign language.
His behavior issues have ceased, and he is a much more controllable child. Chris is just a delightful little boy. We are so grateful to Chrysalis for all of their dedication. When programs and teaching didn't seem to work for him, they were diligent and made the necessary changes to accommodate his learning style. We, his parents, can't thank the staff at CAC enough for helping Chris to be the best that we knew he could be. 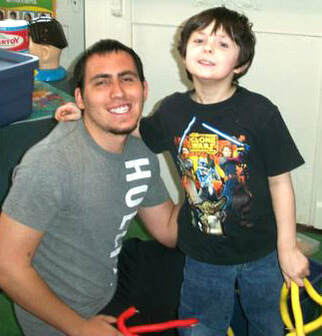 Our son Coleman is now 7 years old and let me tell you how he is beating the odds. He is really smart, and likes to greet people; he will ask you what your name is if he does not know you. He likes to play super heroes, army men, video games; he likes movies, and swimming. His favorite place is the beach.

Coleman was diagnosed with autism on April 6, 2006. He was three years old and had already gone into his own world. It was really hard to take it all in but at the same time we had to get him help; the earlier the better the outcome. We learned as much as we could, and out of what we learned we noticed some things: 1- every child with autism is different 2- there are many treatments out there 3- out of all the things, ABA is going to be the most helpful.

We have to say one of the best days for us was when we learned about Chrysalis opening, I called that day! They were still getting the place together. After talking to Tobie and Kelly we knew this was the answer for Coleman, the answered prayer for help, so that he may really overcome his autism to the best of his abilities. We drive every day from Lancaster to Rock Hill. Some days it is 70 miles a day and some days it is 140 miles a day. We do this because we know it is the best ABA therapy available for our son. Coleman was functioning at a 1 year and 6 months to 2 years and 9 months when he started, and he was 5 years old. He really did not say many words and the ones he did say were not always appropriate. He repeated movies a lot, and did not want to engage in play with others (we had to make him play with other kids a lot). Coleman was biting, kicking, throwing tantrums, could not go to stores, did not like to wait for anything and worst of all, did not really know how to express his wants and needs appropriately.

We have tried the home program in the past and did not see the improvement that Chrysalis has done working with Coleman. In the home program, the therapists were not properly trained, we could not keep therapists to get consistent ABA therapy, and I really felt like they were wasting my son's time. This is the program you only read about in books, every child with autism needs this chance to grow and progress to the best of his or her own ability and Chrysalis Autism center is the place to help. We know when our son is dropped off there he is not wasting his time, and we know that they take good care of all their children like they were their own. The therapists are trained and closely monitored. Every child with autism is different and Chrysalis gives each child an individual program based on his or her own needs. If they run into something they are teaching and the child is not getting it, they find a new way to teach it and they keep working with the child until they learn it.
​
Coleman is a 7 year old boy with autism, he is an awesome son and a hard worker, he can tell me what he wants and where he wants to go when asked and out of the blue. Coleman can answer questions, and he now enjoys playing with other children, and loves going to stores, when we go to the grocery store he lets me know everything he is out of. He does not kick or bite, and he does not throw tantrums very often. Every child with autism is different, and every child with autism will overcome their autism to the best of his or her own ability and Chrysalis Autism Center is there to make sure that the kids get the ABA therapy on a individual level of each individual kid. Coleman has had consistent ABA therapy at the Chrysalis Autism Center, he has been there since September of 2009, and without them he would not have grown his wings to fly. I truly believe in my heart every child needs that chance and Chrysalis is there to give their kids the wings to fly!